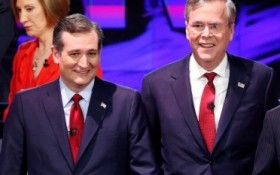 Billionaire Donald Trump has electrified millions of frustrated Republican voters and stormed through the GOP primary with a commanding delegate lead.

His success in the 2016 presidential nomination race, according to political analysts, has revealed a deep-seeded anger among voters toward establishment Republicans… and it has party officials so anxious, they’re pulling out all the stops to stop it.

Now, rumors indicate that the Bush political dynasty may be set to weigh in. Former Florida Gov. Jeb Bush may no longer be onstage or in the race, but the onetime presumed front-runner is involved again. Bush has summoned Texas Sen. Ted Cruz, as well candidates John Kasich and Marco Rubio — but not Trump — for private meetings ahead of Thursday night’s GOP debate.

Cruz is seeking Bush’s backing before the critical winner-take-all Florida primary on Tuesday.

Meanwhile, Bush’s brother, Neil, has already signed on with Cruz’s campaign as a member of his finance team.

There is no love lost between the Bushs and Trump. Jeb and The Donald engaged in heated confrontations throughout the campaign, repeatedly referring to each other as “loser.”

And the family wouldn’t be the first within the party establishment to realize that while Cruz may not be their perfect candidate, he may be the GOP’s best last chance to stop Trump.

Other possible Cruz supporters include reluctant Senate colleagues and former presidential rivals with strong ties to major donors, who have long feared Cruz’s purist ideology but dread the prospect of a Trump nomination even more. The first-term Texas senator on Wednesday announced the backing of one former primary opponent, Carly Fiorina.

“It’s an outsider year, and the most logical person to take on Trump based on past performance is Ted Cruz,” said another former presidential opponent, South Carolina Sen. Lindsey Graham. Earlier in the year, Graham likened the choice between Cruz and Trump to “being shot or poisoned.”

“He’s not my preference,” Graham said of Cruz. “But we are where we are. And if Trump wins Florida and Ohio, I don’t know if we can stop him.”

Indeed, next Tuesday’s winner-take-all contests in Florida and Ohio have injected a sense of urgency into the GOP’s anti-Trump movement.

“The Republican establishment is in its death throes,” said longtime tea party leader Mark Meckler. “The only remaining candidates are 100 percent anti-establishment.”