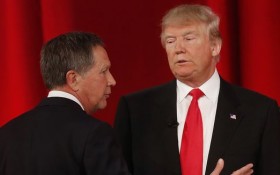 The battle for Ohio is one of the closest contests yet in the 2016 Republican presidential nomination contest — and it could be the most important.

Ohio Gov. John Kasich is fighting for his political future today, desperate for a win in his home state to both keep his bid for the White House alive and to complicate frontrunner Donald Trump’s path to the nomination.

Kasich’s ultimate plan is to earn all the delegates in the winner-take-all Ohio, and to use his momentum to prevent Trump from gaining enough delegates to win the nomination outright at the Republican National Convention in July.

Then, Kasich hopes to get the nomination himself in a so-called “brokered” convention.

But none of that happens unless Kasich wins Ohio first.

A governor winning his home state is ordinarily nothing to roil the waters, but what’s ordinary in 2016? This is swing-state Ohio, after all, and another big cache of delegates who all go to the winner.

Looking strong in Florida, Trump added late events in Ohio to try to fend off the governor and avoid complications on his path to the nomination: namely, the contested “brokered” convention.

With more delegates up for grabs than almost any other day in the primary calendar, Tuesday’s contests affords Trump the chance to put his nominations out of sight for  competitors.

But the establishment is doing everything they can to stop it from happening. Both Florida Sen. Marco Rubio and Kasich have suggested they might not be able to support Trump if he’s the nominee, an extraordinary stance for intraparty rivals. House Speaker Paul Ryan has also taken lightly veiled shots at the businessman.

Heading into Tuesday, Kasich appeared to have the best chance of holding off Trump. The governor spent Monday campaigning in his home state alongside Mitt Romney, the 2012 Republican nominee and a fierce critic of Trump.

“This is the guy Ohio has to vote for, and America’s counting on you,” Romney told the crowd at a Kasich event in North Canton. While Romney has not endorsed Kasich, he’s said he’ll do whatever is needed to help all of Trump’s rivals.

Rubio, despite having the backing of numerous GOP elected officials, appears to have slipped in recent public polls in Florida. The senator tried to stay upbeat Monday, perhaps his final full day of campaigning in the 2016 race.

“Tomorrow’s the day where we are going to shock the country,” Rubio said during a stop in Jacksonville.

If Trump sweeps Tuesday’s contests, he’d still have to keep winning in order to clinch the nomination. But he would cross an important threshold by collecting more than 50 percent of the delegates awarded so far.

Without a clear win, the GOP nomination could come down to a brokered convention — which means establishment backroom deals that would not bode well for Trump.

Texas Sen. Ted Cruz, who has defeated the businessman in seven states, is the only remaining GOP candidate who still says unequivocally that he would support Trump if he becomes the nominee.