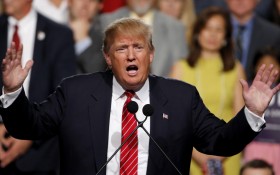 Reports are suggesting that GOP presidential candidate Donald Trump has agreed to pledge to the Republican National Committee to not to run as a third-party candidate. But given Trump’s fiery nature, there’s really no way to tell if he’ll stick to the deal. A pledge is hard to enforce, after all.

Seeking to avert a 2016 disaster, the RNC on Wednesday challenged every GOP presidential candidate to sign a pledge not to undertake a third-party bid under any circumstances.

According to the Associated Press, the timing of the pledge strongly suggests an agreement has been reached.

While neither side would publicly confirm late Wednesday that an agreement was finalized, Trump has hinted in recent days the GOP lobbying was beginning to work.

Trump had suggested he would soon decide whether to rule out a third-party bid, saying “I think a lot of people are going to be very happy.”

While he is leading the packed Republican field in early polls, the billionaire businessman last month repeatedly threatened to launch a third-party bid — leaving open the possibility even at the GOP’s first presidential debate last month — should he fail to claim the Republican presidential nomination. Such a decision would make it all but impossible for the Republican Party to win the White House in 2016.

RNC officials have been working privately with Trump’s campaign for several weeks to avert such a scenario.