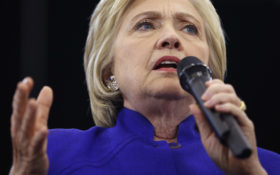 The mainstream media, liberals, foreign donors, establishment backers, and globalists won’t like it, but it’s official: The American people have totally rejected them.

Clinton conceded the presidency to Trump in a phone call early Wednesday morning, a stunning end to a campaign that the mainstream media assumed was poised to make her the first woman elected U.S. president. Voters had other plans.

Clinton, who watched the returns hunkered down with family and close aides at a Manhattan hotel suite, made no public appearance before supporters who had gathered under the glass ceiling of the Jacob K. Javits Convention Center planning to celebrate what was expected to be her historic victory.

Despite their bitter campaign, Trump praised Clinton in a speech to cheering supporters Wednesday, and said “it is time for us to come together as one united people.”

“I will be president for all Americans,” Trump said, and announced it was time to “reclaim our country’s destiny.”

“The forgotten men and women of our country will be forgotten no longer,” Trump told the crowd. “America will no longer settle for anything less than the best.”

The mood inside the convention center grew increasingly grim as Trump captured battleground states like Florida, North Carolina and Ohio and shattered a longstanding “blue wall” of states in the Upper Midwest that had backed every Democratic presidential candidate since her husband, Bill Clinton, won the presidency in 1992.

Democrats — starting with Clinton’s campaign and the White House — were left wondering how they misread their country so completely. Aides stopped returning calls and text messages. Supporters left election night parties in tears.

“My disappointment makes me not trust the rest of the world,” said Katie Fahey, who had flown to New York from Grand Rapids, Michigan, wearing a red pantsuit, expecting a victory party. “I don’t even want to go out. I want to wear sweatpants and curl myself up in a corner.”

The results were startling to Clinton and her aides, who had ended their campaign with a whirlwind tour of battleground states and had projected optimism that she would maintain the diverse coalition assembled by President Barack Obama in the past two elections.