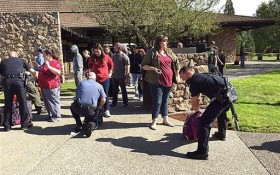 At least 9 people are dead and more than 10 have been wounded after a 26-year-old gunman opened fire at the Roseburg, Oregon campus of Umpqua Community College (UCC) today.

According to authorities, the shooter died after exchanging gunfire with police. At press time it was unclear whether the shooter was killed by officers or took his own life.

“We locked our door, and I went out to lock up the restrooms and could hear four shots from the front of campus,” UCC Foundation Executive Director Dennis O’Neill told the Roseburg News-Review.

A photographer for the newspaper said he saw people being loaded into multiple ambulances and taken to the local hospital.

The Douglas County Sheriff’s Office reported on Twitter that it received a call about the shooting at 10:38 a.m. Students and faculty members were being bused to the county fairgrounds, the sheriff’s office said.

Mercy Medical Center in Roseburg reported that it had received at least nine patients from the shooting.

Former UCC President Joe Olson, who retired in June after four years, said the school had no formal security staff, just one officer on a shift.