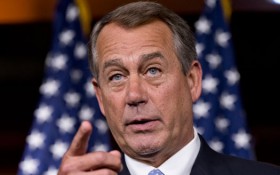 House Speaker John Boehner is reportedly working on a backroom deal with Democrats that would protect Planned Parenthood while paying lip service to conservatives who want the group defunded.

A group of House conservatives is threatening to force a government shutdown on October 1 unless federal money for Planned Parenthood, the nation’s largest abortion provider, is stripped from a funding bill.

Boehner and other Republican leaders are worried that voters will blame the GOP for a shutdown, and they seem to have worked out a secret strategy for avoiding that possibility.

Today the House leadership is expected to introduce two bills: One would block Planned Parenthood’s federal funds for a year. The other would inflict criminal penalties on doctors who don’t try saving infants born alive during abortions.

While the measures should pass the House, they are dead on arrival in the Senate and would certainly be vetoed by President Barack Obama anyway.

Critics say that Boehner knows the bills are doomed and that they amount to nothing more than posturing. Boehner and other Republicans will be able to make it appear like they stood up to Planned Parenthood — and, in exchange, more conservative House members may not force a shutdown on October 1.

But the end result is the same — Planned Parenthood will get its federal funds.

Not all Republicans are on board with this plan, though.

Rep. Thomas Massie, R-Ky., said Boehner wants to “implement what the lobbyists want, not what the constituents of our district want.”

The issue over federal funding of Planned Parenthood came to a head recently, after secretly recorded videos released in July raised questions about whether the group profits from selling fetal tissue for medical research.