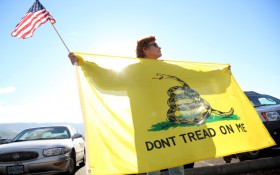 The protesters and armed militia members who have occupied the Malheur National Wildlife Refuge in Eastern Oregon say they don’t want violence.

But as the occupation extends to its fourth day, some law enforcement experts are worried that bloodshed may be inevitable.

Law enforcement analyst Art Roderick told CNN that a confrontation with a large law enforcement force is what the protesters, who are concerned about the use of public lands in the West, are “looking for.”

And in interviews this week, protest leader Ammon Bundy (son of rancher Cliven Bundy, who was involved in a 2014 Nevada standoff with the government over grazing rights) said that if a raid were to occur, the men and women occupying the refuge would defend themselves.

Bundy has said the protesters have enough food and supplies to last for months, if needed.

So far, the remote location of the refuge has allowed federal and local officials to hang back and see how the situation plays out. Schools were canceled this week in the small town of Burns, near where the refuge is located, but by and large there is no immediate danger to the public.

But the takeover puts federal officials in a delicate position of deciding whether to confront the occupiers, risking bloodshed, or stand back and possibly embolden others to directly confront the government.

Right now, an estimated two dozen protesters, many armed, are occupying the refuge. But experts are warning that if the numbers swell and reach a critical mass, law enforcement officials may feel compelled to act.

And growing the number of protesters seems to be what Bundy has in mind. In a post to the Bundy Ranch Facebook page early this morning, Ammon Bundy encouraged more people to join the occupation of the refuge.

“We need more good men and women to come and participate in the work,” Bundy wrote. “We have good facilities and regular meals. Come and be part of assisting the people in claiming & using their lands and resources. There are no road block, just navigate to the refuge and look for the media trucks.”

The activists seized the refuge about 300 miles from Portland on Saturday night. The armed group said it wants an inquiry into whether the government is forcing ranchers off their land after Dwight Hammond and his son, Steven, reported back to prison Monday.

The Hammonds were convicted of arson three years ago for fires on federal land in 2001 and 2006, one of which was set to cover up deer poaching, according to prosecutors. The men served no more than a year until an appeals court judge ruled the terms fell short of minimum sentences that require them to serve about four more years.

President Barack Obama said Monday federal authorities were monitoring the situation, but agents made no apparent moves to surround the property or confront the group — an approach that reflected lessons learned from bloody standoffs at Ruby Ridge, Idaho, and Waco, Texas, in the early 1990s.

That prompted complaints from many observers who suggested the government’s response would have been swifter and more severe had the occupants been Muslim or other minorities.

“There seems to be somewhat of a reluctance to think white people are as dangerous as people of color,” said Heidi Beirich of the Southern Poverty Law Center, which tracks hate groups.

Beirich said the group was emboldened by the government’s failure to hold Cliven Bundy or his supporters accountable in 2014 after hundreds of armed anti-government activists rallied to his defense when federal authorities started seizing his cattle over more than $1 million in unpaid grazing fees.

Michael Barkun, an emeritus professor at Syracuse University who has studied extremist groups, said not confronting the Oregon group could embolden others.

“You can say, well, a negotiated settlement emboldens them,” he said. “But by the same token it deprives them of a confrontation that some of them want.”