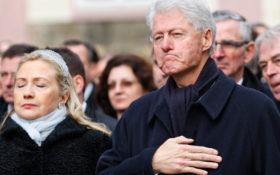 Former President Bill Clinton made headlines Saturday when he took to Twitter to deny a longstanding rumor of corruption — and the alleged lie was shoved right back in his face by anti-secrecy organization WikiLeaks.

Bill took to social media to deny that he diverted funds from the Clinton Foundation’s Haitian relief program to pay for daughter Chelsea’s wedding Saturday.

The former president wrote, “No Clinton Foundation funds — dedicated to Haiti or otherwise — were used to pay for Chelsea’s wedding. It’s not only untrue, it’s a personal insult to me, to Hillary, and to Chelsea and Marc.”

No Clinton Foundation funds—dedicated to Haiti or otherwise—were used to pay for Chelsea’s wedding. It’s not only untrue, it’s a personal insult to me, to Hillary, and to Chelsea and Marc.https://t.co/YEHqqYrsxW

Emails from a top aide, however, say otherwise.

That’s according to WikiLeaks, who replied to Bill’s tweet with an email from Doug Band.

Band is a longtime Clinton insider that hated Chelsea so much he referred to her as a “spoiled brat” — and what he said in his emails is shocking. The journalist organization claims Band’s emails are proof that Clinton Foundation “resources” did pay for the lavish, multimillion dollar wedding between Chelsea and banker Marc Mezvinsky.

Of course, this isn’t the only controversy surrounding Chelsea Clinton. For years, critics have made accusations of corruption against her and her parents.

For example, The Horn News reported in Oct. that Chelsea may have used her position to give millions in taxpayer cash to her best friend.

Are the Clintons corrupt?