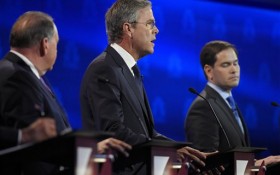 Republican presidential candidates appeared to have agreed on a series of demands to give them greater control of debates, but late Monday it was announced that most the GOP candidates would not sign on to present a united front.

The dynamics of the extraordinarily crowded contest prompted the campaigns to try to wrestle some control of the debates from the Republican National Committee and media hosts, but infighting ultimately undid the effort.

Representatives from more than a dozen campaigns emerged from a closed-door meeting in suburban Washington Sunday night having initially agreed to several changes to be outlined in a letter to debate hosts in the coming days, but talks fell apart Monday evening.

The demands included largely bypassing the RNC in coordinating with network hosts, mandatory opening and closing statements, an equal number of questions for the candidates, and pre-approval of on-screen graphics, according to Ben Carson campaign manager Barry Bennett, who hosted the meeting.

The GOP’s most recent debate, moderated by CNBC in Boulder, Colorado, on Wednesday night, drew harsh criticism from campaigns and GOP officials. Afterward, some candidates complained that the questions were not substantive enough; others wanted more air time or assurance that candidates would get opening and closing statements.

New Jersey Gov. Chris Christie on Monday morning was the first candidate to distance himself from the new unified demands.

“Do not count me in the group that’s doing this moaning and complaining about this,” Christie said on CNN. His campaign attended the meeting to listen, he said, but “I support the RNC continuing to make these decisions.”

He added that “the third debate wasn’t awful,” although he disliked moderators interrupting candidates’ answers.

“The presidency is almost never scripted, so we shouldn’t have these debates scripted, either,” Christie said.

Three debates remain before the first nomination contest, the Iowa caucuses on Feb. 1. The next one is scheduled for Nov. 10 in Milwaukee. The RNC has sanctioned five debates after the caucuses.

Some candidates are trying to use the debate discord to their advantage — none more than Texas Sen. Ted Cruz.

Campaigning in Iowa this weekend, he slammed the CNBC debate moderators for asking questions that he said “illustrate why the American people don’t trust the media.” He was cheered after calling for future debates to be moderated by conservatives such as radio host Rush Limbaugh.