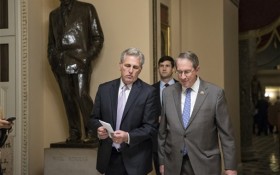 Long outdated and widely criticized as unrealistic, the 2002 No Child Left Behind education law is on track for a major revision after the House voted to dramatically limit the federal government’s role in education policy but keep the annual testing requirements for the nation’s public schoolchildren.

A bipartisan compromise measure worked out between House and Senate negotiators passed the House easily, 359-64.

The bill would return to the states the authority to decide how to use students’ test performance in assessing teachers and schools, and it would end federal efforts to encourage academic standards such as Common Core.

The 1,000-plus page measure, which the House passed on Wednesday, now heads to the Senate for a vote early next week. President Barack Obama is expected to sign it.

Rep. John Kline, R-Minn., who led the House-Senate conference committee on the legislation, said Washington has been micromanaging the nation’s classrooms for too long.

“Today, we turn the page on the failed status quo and turn over to our nation’s parents and our state and local leaders the authority, flexibility and certainty they need to deliver children an excellent education,” said Kline.

The White House said the bill would “reduce over-testing and one-size-fits-all federal mandates,” though some conservative lawmakers argued that it would not go far enough, and they voted against it.

Outgoing Education Secretary Arne Duncan, who had found workarounds for some of No Child’s most stringent requirements, praised the bill as a critical step toward protecting the civil rights of students.

“It enshrines in law the expectation that where schools serve students poorly or have low graduation rates over extended periods of time, and where groups of students aren’t making progress, there will be accountability and action for change,” Duncan said in a statement after the vote.

The No Child Left Behind Act, passed with broad support in Congress and signed by President George W. Bush in 2002, has been due for renewal since 2007. But previous attempts to reauthorize the law have gotten caught in a broader debate over the federal role in public education.

The legislation would maintain a key feature of the No Child law: annual reading and math testing of children in grades 3 through 8 and once in high school. And it would require schools to make those test scores public, noting students’ races and whether they are disabled, to help identify achievements gaps and struggling schools.

Principals, teachers, parents and others have complained for years about what they consider a maze of redundant and unnecessary tests and too much “teaching to the test” by educators. The legislation would encourage states to set limits on the total amount of time kids spend taking tests and would end federal efforts to tie test scores to teacher evaluations.

Some more conservative voices said the bill was an improvement over No Child, but still fell short.

Neal McCluskey of the libertarian Cato Institute cautioned that the federal education secretary could still wield too much influence when it comes to monitoring accountability plans for schools.

“It does not appear that the secretary can state specifically what a plan must have, but the Ed Sec could potentially veto plans that he deems inadequate until – wink, wink – he gets what he wants,” McCluskey blogged.

But teachers’ unions praised the vote on the Every Student Succeeds Act (ESSA) as a historic step.

“For the first time since No Child Left Behind was enacted nearly 14 years ago, ESSA empowers educators as trusted professionals to make school and classroom decisions while keeping the focus on students most in need,” said National Education Association President Lily Eskelsen García.

Under the bill, the Education Department would have a much-diminished role and no longer be able to sanction schools that fail to improve. Instead, states would be responsible for working with schools and local districts to develop achievement goals and accountability plans. Still, states would be required to intervene in the nation’s lowest-performing 5 percent of schools, in high school “dropout factories” and in schools with persistent achievement gaps — something Democrats insisted must be part of any education overhaul.

On Common Core, reviled by many conservatives, the bill says the Education Department may not mandate or give states incentives to adopt or maintain any particular set of academic standards.

The Common Core college and career-ready curriculum guidelines were created by the states, but have become a lightning rod for those worried that Washington has too much influence in public schools. Since 2012, the administration has offered grants through its Race to the Top program for states that adopted strong academic standards for its students.

The bill also ends the waivers the Obama administration has given to more than 40 states, exemptions granted around the more onerous parts of No Child when it became clear that requirements such as having all students proficient in reading and math by 2014 would not be met.

One thing absent from the bill is portability — allowing money to follow low-income students to public schools of their choice, an idea embraced by Republicans. Those dollars would remain at struggling schools. An earlier version of the House bill that very narrowly passed the chamber in July included portability, something that was ditched in the compromise measure with the Senate. As part of the new bill, a small pilot program would be allowed that would let some federal money move with students in some school districts.