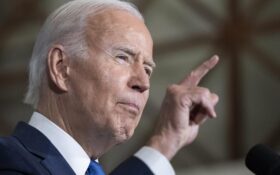 Speaking to representatives from hundreds of Native American and Alaska Native tribes, Biden reiterated and announced a series of new commitments.

Also, he made some characteristic gaffes.

Biden spoke on the opening day of the two-day White House Tribal Nations Summit to representatives from hundreds of Native American and Alaska Native tribes, reiterating and announcing a series of new commitments.

“So, let me close with — with a word my dad used all the time: respect. Everyone is entitled to be treated with respect and dignity — the dignity that comes from just being who we are. This is especially true for Tribal nations to whom the United States owes a solemn trust and treaty obligations that we haven’t always lived up to,” Biden said, before pausing to address the interrupting member of the audience.

“When I talk about respect, here is what I mean by respect: respect for tribes as nations and treaties as law. Respect for — Beg your pardon?”

The audience member repeated, “Thank you!”

Biden replied, “I was getting a little worried,” Biden said. “I thought you said — someone said ‘no.'”

In other words, Biden mistook a fan for a heckler. Hearing aids are available over the counter now after an August ruling by the FDA, but that agency remains somewhat independent of the Biden administration.

In any case, Biden has reason to expect hecklers at the White House Tribal Nations Summit. His administration has been quietly stealing Native American lands to establish new monuments, according to an October report from The Horn News.

“President Biden designated a new National Monument in the middle of the Ute Indian Tribe’s traditional homelands without tribal consultation and including the Tribe in the management of these lands,” the Ute Indian Tribe said in a statement at the time.

Take a look at Biden’s gaffe —

Biden also went viral for mistakenly referring to the Escalante River as the “Escalade” River.

An Escalade is a model of Cadilac.

BIDEN: "When I restored national monuments at Bears Ears and the Grand Staircase Escalade in Utah…"

On Wednesday, Biden vowed to bolster tribal consultations, inclusion of Indigenous knowledge in decision-making and funding for communities struggling with the impacts of climate change.

The Biden administration said its goal is to build on previous progress and create opportunities for lasting change in Indian Country, which isn’t guaranteed without codified laws and regulations.

Among the pledges from the Biden administration is to establish uniform standards for federal agencies to consult with tribes and go beyond a “check the box” exercise, finalize a 10-year plan to revitalize Native languages and strengthen tribal rights like hunting and fishing that are outlined in existing treaties.