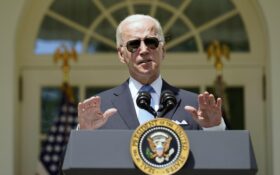 Joe Biden presides over the most “woke” administration in U.S. history, but ironically, he’s being accused of the worst acts of white supremacy: stealing ancient American Indian burial lands and perpetrating “genocide” against their modern-day descendants.

It began last Wednesday, when Biden created the newest National Park, Camp Hale, which consists of 53,804 acres of land in Colorado. That land contains the bodies of members of the Ute tribe, remains so old they long predate written history.

Seizing American Indian land for the U.S. government is “an unlawful act of genocide,” spokespeople from the tribe said the day of Biden’s announcement. “This unlawful action by the President today is a desecration of our ancestors that remain buried on our homelands.”

“President Biden designated a new National Monument in the middle of the Ute Indian Tribe’s traditional homelands without tribal consultation and including the Tribe in the management of these lands. The Tribe and its elected leaders were even excluded from the event taking place on their homelands,” said the Ute Indian Tribe Business Committee.

It’s not that the White House didn’t know what it was doing. “The Camp Hale and Tenmile Range area remains culturally important to the Ute people,” Biden’s statement notes, before it singles out the tribe’s artifacts.

“Burial sites of historic connection to the Ute Tribes — and of importance to them today — can also be found in the area,” the official proclamation states. “One such site holds the 8,000-year-old remains of an ancient Ute — believed by some to have been a person of great stature in the Ute community.”

Biden’s announcement listed the tribal riches that his government seized, as if he were bragging about another government confiscation of American Indian possessions.

That’s definitely how the tribes see it. “Colorado removed us because they wanted our lands and resources” in 1880, said Shaun Chapoose, chairman of the Ute committee. “From our point of view, if we’re not careful, we won’t even exist.”

Not everyone was shocked by Biden’s latest land grab.

The state’s Democrats cheered him on every step of the way.

Rep. Joe Neguse, D-Colo., claimed that he was joining “with all Coloradans in applauding President Biden’s decision to name Camp Hale as this country’s newest national monument.”

Senator Michael Bennett, D-Colo., said, “I am grateful to President Biden for answering Colorado’s call” to “safeguard our wildlife and public lands, and strengthen our outdoor recreation economy.”

His fellow U.S. senator, Democrat John Hickenlooper, praised Biden’s efforts to “protect” the lands. Hickenlooper also said that Bennett spurred Biden to commit this act of genocide by urging him to seize ancient Indian land under the Antiquities Act.

The Democrats cast stones at the Indians and then performed yet another government confiscation. Meanwhile, the American Indians actually lined up with conservative Republicans like Rep. Lauren Boebert, R-Colo.

“Shamefully, Biden ignored the concerns and opposition of impacted communities so he could appease Green New Deal extremists,” Rep. Boebert said in a statement.

“Rather than working on real issues like reducing inflation and improving the economy, Joe Biden came to Colorado today to unilaterally lock up hundreds of thousands of acres through the stroke of his pen,” Boebert said — a reference to the fact that, in the same announcement, Biden also withdrew 220,000 acres of the land from oil and gas leasing for the next 20 years.

One headline got the formula just right: “Biden, Colorado Democrats celebrate national monument designation at Camp Hale.” The same story, with the same facts, just two years ago would have created a headline like: “Trump, Republicans celebrate genocide.”

But somehow, those rules did not apply to Biden, whom the Left has allowed to skate on racist comments his entire political career.

This is not even Biden’s first clash with American Indian tribal leaders over his administration’s land grabs and directives. Last November, the Department of the Interior enacted a policy that stopped Indians in New Mexico from collecting oil revenues—something Biden said was necessary to stop the destruction of the environment…something Indians found extremely insulting.

“We’re not destroying anything — we are Native Americans ourselves. Nobody is destroying the park,” a member of the Navajo Nation named Delora Hesuse told Fox News. “It just seems like they are listening more to the environmentalist people” than citizens who live on the land.

That seems to be the same story everywhere in the Biden administration. Woke activists, left-wing radicals, and well-heeled pressure groups have the president’s ear—and get the administration’s action—not everyday Americans trying to preserve a way of life his administration seems intent on destroying.