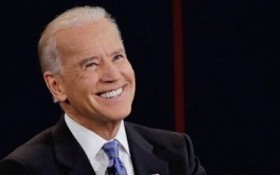 To many watching the Democratic presidential race, Vice President Joe Biden must have appeared like the kid paralyzed with fear on the high dive. Come on, Joe – either jump in, or get out of the way!

Well, the long wait may finally be over. According to the Associated Press, Biden is expected to make a decision within a month, and likely sooner.

Tuesday, Biden headed to Florida, where he’s sure to get a glimpse of his presidential prospects as he considers a late entry into the 2016 Democratic primaries.

Biden plans to appear at Miami Dade College and headline a private fundraiser for Senate Democrats on Wednesday as he mulls a potential challenge to Democratic front-runner Hillary Rodham Clinton. Interest in a Biden bid has intensified in recent weeks as Clinton has struggled with what some Democrats consider a lackluster start to her campaign and scrutiny over her use of a private email account and server as President Barack Obama’s secretary of state.

“There’s a malaise inside the race right now with Clinton. People I know who are supporting her are not necessarily withdrawing, but are unenthusiastic,” said Tony Bisagnano, an Iowa state senator who backed Biden’s campaign in 2008 and wants him to run again.

But he cautioned: “We’re getting close to where it’s going to be a tough race if he waits much longer.”

Under consideration is whether Biden can meet the basic criteria to be a serious contender, such as whether he would have a plausible path to victory in the campaign and whether he would be able to raise enough money to be competitive.

Democrats say he would need to join the field in advance of the first televised debate on Oct. 13. Should he do so, he’ll face several major obstacles against a field that includes Clinton, Vermont Sen. Bernie Sanders, former Maryland Gov. Martin O’Malley and others.