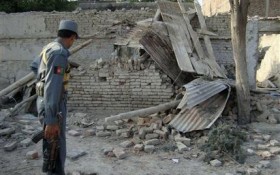 The relationship between the United States and Pakistan has been on shaky grounds for years, and numerous intelligence experts have suggested that Osama bin Laden using the country as a hideout — living just a few hundred yards away from a Pakistani military academy — was no accident.

Could this new reveal put an end to the relationship once and for all?

Recently declassified U.S. government cables suggest Pakistan’s intelligence service paid a U.S.-designated terrorist organization $200,000 to carry out one of the deadliest attacks against the CIA in the spy agency’s history.

Seven CIA employees were killed when a Jordanian doctor and double agent gained access to the base after tricking the Americans into believing he would lead them to Ayman al-Zawahiri, then al-Qaida’s No. 2. The correspondence released by the National Security Archive at George Washington University dates to the weeks after the attack.

A Jan. 11, 2010, document says the head of the Haqqani network, a Taliban-allied group the U.S. considers terrorists, held two meetings with senior officials of Pakistan’s Inter-Services Intelligence the month of the bombing.

“The first discussed funding for operations in Khowst province” and “funds were later provided to tribal elders in Khowst province for their support of the Haqqani network,” the cable says, using an alternative spelling for the area. At the second meeting, Pakistani intelligence officials gave “direction to the Haqqanis to expedite attack preparations and lethality in Afghanistan.”

A Feb. 6, 2010, cable, which like the other was heavily redacted, is more specific. Network leader Siraj Haqqani and another individual were provided $200,000, it says, “to enable the attack on Chapman.” The document refers to several individuals involved in the plot, including an Afghan border commander, “to enable a suicide mission by an unnamed Jordanian national.”

The Jordanian would have been Humam al-Balawi, the supposed al Qaeda turncoat whom the CIA codenamed “Wolf.” As the CIA ushered him on to its base on Dec. 30, 2009, al-Balawi detonated a suicide bomb. A Jordanian intelligence official and an Afghan driver also died, while six people were injured. It was the most lethal attack against the CIA in the 15-year Afghanistan war and possibly since the 1983 embassy bombing in Beirut.

Pakistan’s embassy in Washington had no immediate comment on the cables. But a U.S. intelligence official said the information was uncorroborated and inconsistent with what is known about the 2009 suicide bombing at Camp Chapman in Khost, Afghanistan, near the Pakistani border.

The U.S. has long cited the links between the Pakistani intelligence and the Haqqanis, a group that includes criminal and insurgency elements, and which uses Pakistani territory as a rear operating base. When Adm. Mike Mullen stepped down as chairman of the Joint Chiefs of Staff 3 1/2 years ago, he went so far as to call the network a “veritable arm” of Pakistan’s ISI.