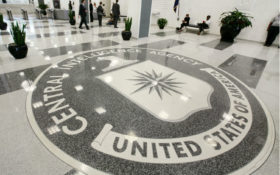 Angry, leftist politicians are seeking to overthrow the U.S. government, holding clandestine meetings with CIA operatives… and the media is complainant in the treasonous task.

It’s a sentence that reads like it comes from a dime-store spy novel… but it’s very real, according to best-selling author and noted journalist Glenn Greenwald.

Appearing on Tucker Carlson’s show on Fox News Thursday, Greenwald warned that there is “obvious open warfare” between the CIA and President-elect Donald Trump. Even worse, Democratic lawmakers were encouraging and “openly calling for and cheering for the intervention of the CIA.”

That, folks, is high treason.

These warnings aren’t to be taken lightly, either.

According to his biography, “Glenn Greenwald is one of three co-founding editors of The Intercept. He is a journalist, constitutional lawyer, and author of four New York Times best-selling books on politics and law.” His major awards include the 2008 Park Center I.F. Stone Award for Independent Journalism, the 2010 Online Journalism Award, the 2013 “George Polk award for National Security Reporting; the Gannett Foundation award for investigative journalism and the Gannett Foundation watchdog journalism award; the Esso Premio for Excellence in Investigative Reporting in Brazil (he was the first non-Brazilian to win), and the Electronic Frontier Foundation’s Pioneer Award.”

He warns that liberals and the Democratic party are pushing the CIA to “undermine and subvert and destroy the legitimacy of Donald Trump’s presidency before he’s even inaugurated and I think what you’re seeing is actually quite dangerous.”

“Whenever it comes to national security issues, especially in the post-9/11 era … you see this incredibly close relationship between the media and the intelligence agencies,” Greenwald warned. “When [the mainstream media] serves their agenda, they get scoops, they get secret documents, they get access, and I think a lot of that is what you’re seeing on top of the fact that the media has been aligned against Trump and will side with anybody who wants to subvert him, including the CIA.”

You can see the alarming interview for yourself below —