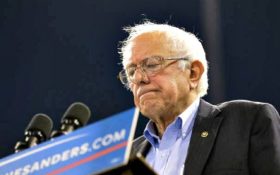 The Democratic National Convention isn’t over yet, but Vermont Sen. Bernie Sanders has already announced he’s out.

After months of dealing with rampant corruption within the Democratic Party, Sanders has announced he’s quitting the party and officially returning to his senate seat as an independent.

Bernie Sanders tells @bpolitics breakfast w/reporters he'll return to the Senate as an Independent, not a Dem: 'I was elected as an Ind.'

While it’s no surprise to political observers that Sanders is leaving the party after his reported mistreatment, the timing of his announcement is strange.

And it’s unlikely his departure from the Democratic Party will be their only loss, either.

Tensions between pro-Sanders activists and the establishment brass set to crown Clinton as the party nominee have erupted into protests and led to dozens of arrests throughout city of Philadelphia as the convention enters its final day Thursday.

Even leftist celebrity activists are expressing their outrage. Susan Sarandon, Danny Glover, Shailene Woodley and Rosario Dawson joined forces as night fell to protest what they consider slights against loyalists of Sanders.

“There’s been a lot of difficulty in executing the will of Bernie Sanders’ people and surrogates, and this was just a topping for the whole thing because she was ready to go. And she was very, very disappointed,” Sarandon said as the other celebrities joined her on a platform. “This has not gone by lightly, and … we are upset.”

Late Wednesday, hundreds of protesters gathered outside the convention site as Vice President Joe Biden, vice presidential nominee Tim Kaine and President Barack Obama spoke inside.  At one point a protester’s clothes caught on fire while trying to stomp out the flames on a burning flag. The protester dropped to the ground and rolled around to put the fire out. Another tense moment arose when protesters knocked over part of a security fence, but police quickly moved in and put the fence back up. The Secret Service said seven people were arrested and will be charged with entering a restricted area.

Earlier in the day, half a dozen Sanders delegates spoke to about 300 demonstrators gathered at a plaza near City Hall, about 4 miles from the convention site, for rallies and speeches.

Erika Onsrud, an at-large delegate from Minnesota, told the people in the crowd that they need to continue to fight. Amid cheers, she exhorted them: “Stay awake!”

A few blocks away, police detained 10 protesters at Comcast’s corporate headquarters for holding a sit-in accusing the cable TV giant and NBC owner of not reporting the truth. The demonstrators locked themselves with zip-ties to a rolling gate inside the building. Officers briefly closed the 975-foot-tall skyscraper to all but Comcast employees.

Another group of about a dozen anti-Israel demonstrators protested at a hotel where a number of delegations to the four-day convention were staying. They called for a free Palestine.

Thousands of activists have taken to the streets during the convention to voice support for Sanders and his liberal agenda. On Tuesday night, the Bernie or Bust brigades watched in dismay as Clinton became the first woman nominated for president by a major U.S. political party — and many have vowed to quit the party as a result.

Large group of protesters outside of Wells Fargo right now chanting: "Hell no, DNC, we won't vote for Hillary!" pic.twitter.com/0LOayqoVMf

Par for the course, speaking to half empty rooms is her thing!!! Lol! #DemExitNow???????? pic.twitter.com/Lor0IxXP1N

According to The Associated Press, the longstanding bitterness between Sanders’ supporters and Clinton’s seemed to grow worse over the past few days after a trove of hacked emails showed that officials at the Democratic National Committee played favorites during the primaries and sought to undermine Sanders’ campaign.

Before leaving the party, Sanders on Monday criticized Republican presidential nominee Donald Trump and urged supporters to fall in line behind Clinton for the good of the country.

But many were unmoved.

Jennifer Hall flew into Philadelphia from California and said her fellow Sanders supporters seemed tired. She said she came to “comfort the heartbroken, mourn with the mourners and help sustain the effort” fighting against two-party politics.

“We can all cry and keep going,” she said.