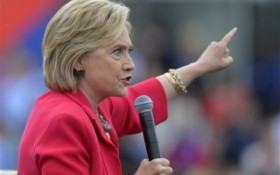 The Benghazi investigation is ramping up, and pressure is mounting on presidential candidate Hillary Clinton’s inner circle. Thursday a top staffer pleaded the fifth rather than appear before the House judicial committee, while later that day Clinton’s former chief of Staff, Cheryl Mills, was being questioned behind closed doors.

Few details were released on the interview of Mills, but knowledgeable officials said the panel asked Mills about her role in preparing “talking points” for administration officials following the 2012 attack on U.S. diplomatic facilities in Benghazi that killed four Americans, including the U.S. ambassador to Libya.

Questions also focused on a private email server Clinton used while serving as secretary of state and how it was set up.

Rep. Trey Gowdy, R-S.C., the committee chairman, described the meeting with Mills as professional and productive. Gowdy said the session would be treated as classified and declined to answer any specific questions.

Jake Sullivan, a former policy director and deputy chief of staff at the State Department, will be questioned Friday in what is expected to be a daylong session.

The interviews with Mills and Sullivan have been upstaged by a lesser-known character in the Benghazi saga, a former State Department employee who helped set up Clinton’s private email server. The former staffer, Bryan Pagliano, told the committee earlier this week that he will assert his constitutional right not to testify at a meeting set for next week.

Pagliano was a State Department employee from 2009 to 2013 and is now a private contractor working in the department’s Bureau of Information Resource Management, according to a department official who asked not to be identified when discussing personnel matters.

The special committee was established last year to investigate the Obama administration’s response to the Benghazi attacks, then widened in recent months to focus on Clinton’s private email account and server.