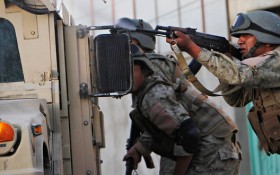 The U.S. Embassy in Afghanistan is warning of an “imminent attack” in the next two days.

According to an official release, the embassy in the troubled Afghani capital Kabul “has received credible reports of an imminent attack… within the next 48 hours.  During this period of heightened threat, the U.S. Embassy strongly urges U.S. citizens to exercise extreme caution if moving around the city.”

Despite the intelligence warning of the impending terror attack, the Obama administration has announced no specific plans to heighten security at the U.S. embassy.

Analysts are warning of a deteriorating security situation in Afghanistan, where U.S. forces number just 10,000 strong since the Obama administration began troop draw downs years ago.

The Taliban have made strategic gains in recent months, and may now have their minds set on a strike against U.S. interests in the capital.

In September, fighting erupted anew in the embattled northern Afghan city of Kunduz. The city briefly fell to the Taliban, which was an embarrassing blow to President Ashraf Ghani.

Earlier this month, Taliban insurgents also ambushed a military-contracted helicopter that made an emergency landing in northwest Afghanistan, killing three people in a shoot-out and capturing 16 other people on board, Afghan officials said.

While the American embassy is now bracing for a possible attack in Kabul, its officials are warning that there are no current details on the “targets, timing, or method.”