Ben Carson: No Muslims in the White House - The Horn News 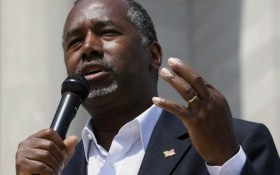 Republican presidential candidate Dr. Ben Carson said this weekend that he doesn’t believe that a Muslim should be elected to the nation’s top office, a comment that has stirred up a huge controversy in the media.

Carson, a devout Christian, says a president’s faith should matter to voters if it runs counter to the values and principles of America. Responding to a question during an interview broadcast Sunday on NBC’s “Meet the Press,” the retired neurosurgeon described the Islamic faith as inconsistent with the U.S. Constitution.

“I would not advocate that we put a Muslim in charge of this nation,” Carson said in an interview aired Sunday on NBC’s “Meet the Press.” ”I absolutely would not agree with that.”

According to the Associated Press, Carson has been picking up a lot of his support by appealing to socially conservative evangelical voters, a key Republican voting bloc in the Iowa caucuses which lead off the state-by-state nominating contests next year.

Front-runner Trump declined to correct a town hall participant who wrongly said President Barack Obama was a Muslim. Days later, Carson spoke about Muslims and the presidency — remarks described as “un-American,” by a spokesman for the Council on American-Islamic Relations, Ibrahim Hooper.

Hooper said the Constitution expressly bars religious tests for those seeking public office. Carson, however, never said Muslims should not be allowed to run for president, and his argument focused mainly on whether a person of Islamic faith could or should be elected.

“To me this really means he is not qualified to be president of the United States,” Hooper said. “You cannot hold these kinds of views and at the same time say you will represent all Americans, of all faiths and backgrounds.”

What do you think of Carsons comments? Are his critics furious that a Christian would publicly state that his preferred religion is Christianity? Or was he over the line?