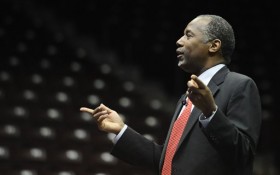 “That’s an easy one: conservative ideology by a long shot,” he said, when asked which factor generated more prejudice.

“In this country, you are not supposed to be black and be a conservative,” added Carson, the only black candidate in the 2016 presidential field. “If you are, you are fair game for any vile thing, for lies and twisting your words.”

Carson’s comments came during an all-day campaign swing in South Carolina, the first of the early voting states with a significant African-American population. Black voters here and nationally trend overwhelmingly to Democrats.

Carson alluded to that disadvantage Wednesday. He did not specifically cite the Democratic Party, but argued that “secular progressives” — terminology he uses often when criticizing various aspects of U.S. liberalism — “are only interested in one thing, and that’s voting blocs. They don’t really care two hoots and a holler about people.”

A famed physician making his first bid for political office, Carson rarely mentions race as he campaigns, unless he is asked. But his race and the circumstances of his life story — rising from a poor, black neighborhood of Detroit to worldwide renown as a pediatric neurosurgeon — form a key part of his appeal among white conservatives who disapprove of government programs they often associated with minorities.

In the autobiographical pitch that anchors his standard speech to voters, Carson talks about the “culture of dependency” he observed growing up. He concedes that his single mother “sometimes accepted assistance,” but says she sought to avoid it.

He bemoans “race wars” perpetrated by “purveyors of division,” and he implicitly lumps President Barack Obama, the nation’s first black president, into that group. He traces public assistance programs to Democratic presidents going back to Woodrow Wilson and calls the efforts a failure because widespread poverty remains.

At a recent South Carolina criminal justice forum organized by black civic leaders, Carson questioned widespread claims of blacks being mistreated by law enforcement in the U.S. “I’m still waiting for the evidence,” he said.

Carson drew laughs Wednesday with one of his standard lines, mentioning that the preamble to the Constitution calls for the government to “promote the general welfare … but that doesn’t mean put everybody on welfare.” As he does at many stops, he clarified that he doesn’t want to get rid of the social safety net, but wants to limit the programs “to people who need them.”

Separately, Carson repeated his call for the U.S. not to admit war refugees from Syria. Having recently traveled to the Middle East, Carson said the better solution is to aid neighboring nations like Jordan.

He argued that the cost of caring for Syrian refugees in the Middle East would be a fraction of what it would cost to resettle them in the U.S., and he maintained that allowing them come to the U.S. “exposes our population to danger” because Islamic State militants would “infiltrate” the program.

The State Department counters that its existing vetting process, in place well before the recent Paris attacks, is sound.

Carson’s South Carolina swing comes amid several new voter surveys that suggest he is slipping from his perch alongside Donald Trump atop the GOP presidential field.

“It’s a marathon, not a sprint. So people will go up and people will go down,” he told reporters Wednesday evening in Spartanburg, after meeting privately with a group of evangelical leaders who have endorsed his candidacy.