Behind the scenes at the Oscars - The Horn News 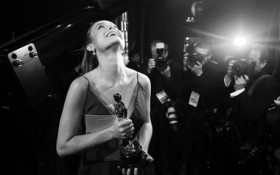 While audiences around the world watch the glamorous Oscars proceedings on TV, a whole different array of memorable starry moments are happening off-camera.

Because the Academy Awards bring together so many top talents, the wings of the stage become an impromptu meeting place for stars across genres.

Here’s a peek at the backstage celebrity spectacle:

WHO HAS A FIVER? Charlize Theron and Emily Blunt watched Chris Rock’s opening monologue on a monitor just off stage right. Theron uttered many enthusiastic “Oh my Gods” while he spoke, and even one “Oh, dang,” before a stage manager handed her the envelope with the winning screenwriter’s name inside.

“Should I open it, guys?” she asked of the various workers backstage. “Come on! I’ll do it for a fiver!”

“I didn’t fall over!” — Cate Blanchett after executing her walk-and-talk presentation in towering heels.

NO JOB TOO SMALL: After presenting the supporting actor Oscar to Mark Rylance, Patricia Arquette realized she’d left her red lipstick behind backstage.

No worry. She told a stage manager about the misplaced “long NARS lipstick” she left behind, and he radioed to have it delivered to her seat.

“That’s the most attention I’ve ever gotten in my whole life!” — Dave Grohl after performing “Blackbird” during the Oscars’ In Memoriam segment.

Among them was Jennifer Garner, who joked that she had tennis shoes on under her floor-length dress. When the manager responded with shock, she came clean: “I am on six-inch heels like every other celebrity.”

“I don’t have on the heels I was supposed to have on,” she said. “I put on what was comfortable.”

“I need my mum.” — Sam Smith after winning best original song for “Writing’s on the Wall.”

BATTLE OF THE OSCAR WINNERS: As the show wound down to its final categories, the night’s winners gathered backstage.

“This is well deserved,” he told her. “Tom’s isn’t,” he said, referring to “Spotlight” screenwriter and director Tom McCarthy.

“You definitely worked your (tail) off,” McKay continued. “Tom did not.”

“Tell me where to go. I have no idea.” — an elated Brie Larson, coming off stage with her new Oscar.