The bathroom debate: Why Trump is right - The Horn News 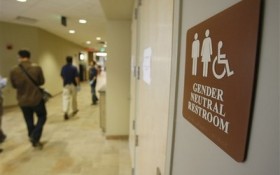 What a century we live in, where one of the biggest issues facing us is the question on which bathrooms one can use.

What is lost in the all-consuming media and political frenzy surrounding the debate is a simple question:

How many people are affected by these highly publicized federal government decisions?

The answer is — no one really knows.

The Williams Institute estimates that the transgender community makes up a minuscule 0.3% of the American population, a total of 700,000 people.

That’s one of the highest estimates available. An analysis by the U.S. Census Bureau identified less than 89,000 adults have changed their name and/or sexual identity in the United States between 1939 and 2010.

Consider that again. The best estimate of a U.S. Census Bureau has says that approximately 1,250 individuals change their birth gender annually.

Obama thrust his administration into this ridiculous debate about who gets to use which bathroom, comparing the bickering over what’s appropriate to the civil rights fight of the 1960s.

In response to North Carolina’s House Bill 2, which in part deals with transgender bathroom access, Obama ordered public schools to allow any student to use any bathroom they say matches their gender identity. His administration threatened the funding of anyone who doesn’t fall in line.

There have been uproars from conservatives concerned for the safety of opening up our restrooms to anyone who wants to enter, and rebuttals from Democrats.

Mainstream news talking heads have latched on, and angrily bicker back and forth over the issue.

No matter which side of the debate you land on, one must accept that the transgender population of America is not the only community that struggles with issues involving public restrooms.

According to Crohn’s & Colitis Foundation of America, about 1.4 million Americans suffer from Crohn’s disease, a painful disease that effects the frequency of bathroom trips. And yet — as terrible as their illness is – no one is suggesting we restructure the entire bathroom infrastructure of the United States.

In 2004, there were as many as 5 million people with dwarfism living in the United States as of 2004, according to Encyclopedia.com. One must assume that, because of the height differences between those with dwarfism and the average adult, there must be difficulties involved with using public restrooms.

There are many other ailments impacting a person’s use of the bathroom, but for some reason we are only debating the one that affects at most 0.3% of Americans.

There will always be niche groups with special needs and it is unrealistic to assume they can all be accommodated with special rules. So how is making this a national debate constructive?

Here’s the fact — It would be logistically impossible and staggeringly expensive to federally mandate specific bathroom accommodations for every single person.

It’s impractical and expensive to do so, something private developers have already recognized. In Charlotte, North Carolina, developers cited cost as the reason behind rejected the proposal of creating gender neutral bathrooms.

“Right now in the building code you have, for example, ‘Assembly’ – which would be a theater. You have to have a water closet or toilet: one for every 125 men, one for every 65 women. Now you include people who don’t fall under the male or female, how do you count them?” Georgie Marquez of Andre Marquez Architects in Norfolk, Virginia told CBN News, “It’s definitely going to be more expensive, especially because are they going to now have more toilets in the male bathrooms? It gets into the whole biology of things.”

When asked about his opinion on the Today show, Trump said, “There have been very few complaints the way it is. People go, they use the bathroom that they feel is appropriate. There has been so little trouble, and the problem with what happened in North Carolina is the strife and the economic punishment that they’re taking.”

When it comes to the transgender bathroom issue, there have been so few incidents where it posed an issue, and so few Americans are affected, is it undeserving of federal attention.

Insisting on expensive and heavy handed federal government intervention is the exact problem with big government.

This is why local governments exist. Let this debate go to town councils and county school districts. Leave this up to private businesses to decide what cost effective, fair accommodation for their customers is.

The bathroom is not a place for the federal government.