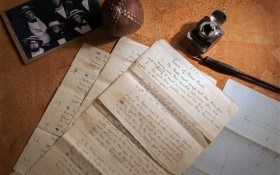 Modern baseball may have found its birth certificate. And with it a new birth date, and new founding father.

Coinciding with the start of the major league season, a set of game-changing documents went up for sale this week. Their authenticity and significance are verified by experts including John Thorn, Major League Baseball’s official historian.

The 1857 documents titled “Laws of Base Ball” establish the essentials of the modern game: The distance of the base paths is 90 feet, the length of the game is nine innings and nine players are in the field.

And they do it three years earlier than the 1860 birth date now recognized.

The documents were authored by Daniel Lucius “Doc” Adams, making him the founding father of America’s pastime, not Alexander Cartwright, who now is credited.

“He’s the true father of baseball and you’ve never heard of him,” Thorn, a consultant on the sale of the papers, told The Associated Press in a phone interview.

Southern California-based SCP Auctions put the documents on sale Wednesday in an auction that lasts until April 23. There have been five bids so far and the current highest bid is $146,410, according to the auction house.

Adams was the president of the New York Knickerbockers Base Ball Club, which hosted a convention of 14 New York-area clubs to codify the rules of “Base Ball.” (It was two words then and in ensuing decades evolved into “base-ball” and finally “baseball.”)

Credit for baseball’s basic tenets now lies with Cartwright, whose plaque in the Baseball Hall of Fame in Cooperstown, New York, calls him the father of the modern game. He was not involved in the 1857 meeting.

Hall of Fame spokesman Brad Horn said there are no plans to change or remove Cartwright’s plaque.

Horn said there were no immediate plans to acknowledge Adams’ contributions, but it is something that would be considered as the historical consensus changes.

“We always want to take a longer lens approach,” he said.

The documents have not been lost or hidden in recent years but no one quite realized their significance.

The owner, whose name has not been released by the auction house, paid $12,000 for them at a 1999 auction of historic documents of all kinds, but they were sold with no known authorship and minimal description.

They were kept in a desk drawer until about six months ago, when the buyer approached SCP Auctions. Their significance slowly emerged after forensic, handwriting and historical analysis.

“It just got better and better and more and more compelling,” said Dan Imler, vice president of SCP Auctions. “It was just mind-blowing once we fully realized what we had.”

The documents capture the game at a crossroads, when rules for “base ball” were arbitrary. Thorn suggests the game could easily have evolved into having nine pitchers and one batter instead of the opposite, and it did come very close to having seven or 12 innings instead of nine.

Thorn said newspaper accounts and other documents have suggested 1857 as the founding year and that Adams was responsible. But they didn’t carry the weight of documents that stipulate specific rules.

“I call these improbable survivors,” Thorn said. “It’s finding what you could not have imagined might have existed.”