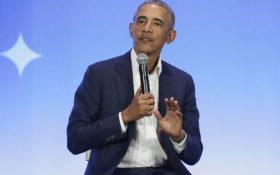 Former President Barack Obama hit a new low in the history of the American presidency when he lashed out at President Donald Trump during Congressman John Lewis’ funeral on Thursday—comparing Republicans to the racist, segregationist Democrats who beat Civil Rights protesters.

Obama blew that tradition out of the water this week.

Not only did he link Trump with racist, segregationist leaders of the past, but he demanded a complete structural remake of the U.S. political system to favor the Democratic Party base.

John Lewis was one of the youngest members of Martin Luther King Jr.’s Civil Rights movement. He led young black Americans across the Edmund Pettis Bridge in Selma, Alabama. Police officers beats him severely, many times, for his beliefs.

As far as Obama is concerned, America hasn’t changed one bit since Selma.

Only today, the rioters, looters, and arsonists in Portland and Seattle are the Freedom Riders—and Donald Trump is the police chief with the dogs and the firehoses.

“Bull Connor may be gone, but today we witness with our own eyes police officers kneeling on the necks of black Americans,” Obama said.

“George Wallace may be gone, but we can witness our federal government sending agents to use tear gas and batons against peaceful demonstrators,” Obama claimed.

There’s a simple term for that: Nonsense.

President Donald Trump sent federal police to arrest the mob of socialists after they spent the last two months trying to burn down a federal courthouse—and the local, Democrat-controlled government would do nothing to stop them.

Or Obama may be repeating the left-wing talking point that President Trump had police tear gas protesters in D.C. so he could stage a “photo-op” of himself holding a Bible in front of the National Cathedral.

But Black Lives Matter rioters had burned the church during their “peaceful” protest, and U.S. Park Police say they cleared the area because Antifa rioters attacked the cops.

But Obama kept going, saying that voting tests are gone, but Republicans are “targeting minorities and students with restrictive ID laws, and attacking our voting rights with surgical precision.”

“Just everybody’s just got to come out and vote” in November, he said—and against Trump, he implied.

The last thing America needs during a time of racial turmoil is “to pour gasoline on that,” said Tucker Carlson. “Stoking the fire for political reasons, it’s disgusting.”

But Obama wasn’t finished. He laid out a political program that would change—you might say “fundamentally transform”—the United States forever.

– Obama said the way to honor John Lewis is by automatically registering everyone to vote, “including former inmates.”

And restoring felon rights is already handing elections to the liberals nationwide. George Soros financed a study in 2002 showing that 70 percent of felons said, if they could vote, they would vote for the Democratic Party. In Virginia, former Democratic Gov. Terry McAuliffe—a Clinton family insider—added at least 168,000 felons to the voting rolls…and it led to a new Democratic dominance in the once GOP-friendly Old Dominion. Now, LeBron James, a group of Hollywood liberals and sports stars, and Soros-funded left-wing radicals want to register as many felons as possible in the nation’s largest swing state, Florida.

– Obama said we should be “making Election Day a national holiday.”

But what holiday will he repeal? Evidently, even some Republicans might join him in repealing Columbus Day.

– Obama said we should guarantee “every American citizen has equal representation in our government, including the American citizens who live in Washington, D.C., and in Puerto Rico.”

Giving the District of Columbia and Puerto Rico statehood would guarantee 6 new congressmen and four new senators, almost all of them left-wing Democrats.

Obama’s “wingman,” former Attorney General Eric Holder, already leads a national movement to take districting of House seats out of the hands of elected officials and put it into the hands of “experts” chosen…by him.

– Obama proposed “eliminating the filibuster,” which he called “another Jim Crow relic.”

Obama spread lies and hatred—but he couldn’t stop himself from smearing the man who’s undoing everything he stood for.

The good news is, Obama exposed exactly what will happen if Democrats win in November: They’ll use fake charges of racism to influence the elections from this day forward.

As Maya Angelou said, “When someone shows you who they are, believe them.”