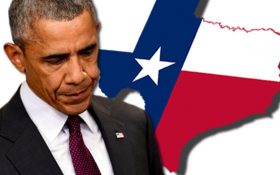 Former President Barack Obama is seething mad as he watches President Donald Trump undo his legacy. Now, he’s teamed up with George Soros to launch a secret anti-voter plot to change the way elections take place and give Democrats control of the country forever.

The governor of Texas is even warning that Soros wants to turn the Lone Star State into San Francisco!

A Soros-linked group is considering suing Texas on the grounds that its voter districts are racist — because not enough Democrats are getting elected. In other words, they want the courts to force Texas to elect more liberals.

Texas is the only large state in the country that regularly votes Republican. California, New York, and Illinois are solid Democrat.

Turning Texas blue means giving the Democrats the White House forever… and they know it.

Gov. Greg Abbott says their plans “threaten the integrity of our elections and the future of our nation for generations to come.”

The plan is being carried out by a group called the National Democratic Redistricting Committee (NDRC). The NDRC’s “proactive legal strategy” will force states to elect more Democrats or be branded racist, sexist, and deplorable.

But the NDRC is headed by Obama friend and former attorney general Eric Holder. That should give you some idea how “colorblind” their plan really is.

They’re waiting to sue Texas because another Soros-allied group has sued Wisconsin over the same issue. The Supreme Court will decide the case next year.

If that lawsuit fails, the NDRC is ready to strike.

Even the topic of “redistricting” makes people’s eyes glaze over – but their plans should keep your eyes open at night.

Right now, whichever party controls the state house gets to select who votes in each district. If voters don’t like the job they do, they can vote them out of office.

It’s obvious why Democrats don’t want the voters to make this decision. After West Virginia Governor Jim Justice decided to switch to the Republican Party, the GOP now controls the governor’s mansion in 34 states. That’s more than any time in almost 100 years.

Voters elected Republicans totally dominate state politics in 26 states – the governor’s mansion and both houses of the legislature.

When voters backed Republicans, they were sending a message: they rejected Obama and everything he stood for.

Eric Holder let the cat out of the bag recently that this is Obama’s revenge for voters stopping his “progress.” Obama has never forgiven the American people for electing a Republican Congress in 2010.

The more Democrats in Congress, the more a left-wing president can radicalize the country. And the more they can abuse their office to try to elect an even more liberal Democrat president.

Celebrity doctor reveals his controversial diabetes cure [sponsored]– What does diabetes have to do with these free recipes?

So now the NDRC is threatening to sue, because the Democrats want the Supreme Court to give them the seats they can’t win at the ballot box.

The NDRC plans to take the power to draw each state’s electoral map away from elected officials and give it to a board of unelected bureaucrats. And Soros, Obama, and their friends intend to control who gets appointed to those “nonpartisan” boards.

The NDRC has raised $10.8 million in its first six months. Obama held a fundraiser in March with Democracy Alliance, an elite and secretive group of Soros’ deep-pocketed friends.

Gov. Abbott has sounded the alarm over Soros and other mega-donors trying to steal elections and mess with Texas.

Soros poured $11 million into a local race in Harris County, because he thought he could buy the election, Abbott warned.

Soros’ billions targeted the state officials who oversee election laws in each state. And now he wants to give the bureaucrats the right to decide whether you get to vote in your own congressional district or not.

“The GOP needs to take the Soros network and the Holder, Obama, and Pelosi alliance seriously,” Abbott wrote. “The integrity of the people’s vote is at stake.”