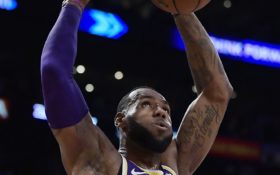 LeBron James has had his share of turnovers, but he wants one more: He wants to flip Florida from Republican to Democrat in the 2020 election. And thinks he’s got the perfect play with the perfect team—a team of convicts.

He wants to register enough ex-felons to vote that the state swings into Joe Biden’s column in November—a goal he shares with left-wing billionaire megadonor George Soros.

And the Los Angeles Lakers star forward is putting his money where his mouth is, buying ex-cons’ way onto the voting rolls.

James is taking advantage of a new constitutional provision that Florida voters passed in the 2018 mid-term elections.

Until Florida adopted Amendment Four, anyone convicted of a felony lost the right to vote. The law said that people who committed the worst crimes shouldn’t be deciding who makes the laws.

Now, Florida felons can get back their right to vote… but only after they pay back all their court-ordered fines and restitution to the people they hurt.

The ballot measure approved by state voters said felons only get to vote after they fulfill “all terms of their sentence”—including paying court fees.

“We knew that there were going to be some financial obligations that were directly connected to the completion of sentences,” said Desmond Meade, who runs the Florida Rights Restoration Coalition, the main group pushing Amendment Four.

But now it seems that most felons can’t, or won’t, pay their fines, so they sued the state instead, saying the fee was unconstitutional.

They won in a lower court, but the Supreme Court ruled 6-3 against them: Pay the fines or stay home.

So, in runs LeBron James to make the save.

James has even started a brand new organization called More Than a Vote with his fellow Hollywood elites to get convicted criminals voting again.

The group describes its members as “Black athletes and artists working together” to fight “systemic, racist voter suppression by educating, energizing, and protecting our community in 2020.”

They plan to collect fees and turn them over to Meade’s group, the FRRC, which has already raised a cool $1.5 million so that crooks can go to the polls this year.

They have until October 5 to register as many ex-inmates as possible for the November presidential election.

An estimated 1.5 million felons are eligible to vote…if they pay their fees.

As of May 2019, Florida’s felons still owed a billion dollars in fines.

But if LeBron’s NBA buddies can collect that money, history shows, the convicts will vote overwhelmingly for the Democratic Party.

About 70 percent of convicted felons say they’d vote for a Democrat if they had the chance, according to a 2002 study funded by George Soros.

University of Florida professor Daniel A. Smith found in a small study that, among ex-cons who could vote again, Democrats outnumbered Republicans almost 10-to-1.

Giving felons the right to vote would hand Florida Democrats a “net gain of 48,000 votes,” according to a larger study by University of Pennsylvania professor Marc Meredith and Michael Morse.

Ex-felons have already helped power Democrats to take over once Republican-leaning Virginia.

Left-wing voter registration drives have failed in Florida before—but this time, Donald Trump’s own family is helping Soros out.

Kushner said ex-cos are part of “the new coalition that President Trump is building.”

But Politifact looked into it and said “his comment isn’t more than wishful thinking.”

It’s more than that: It’s an act of deception—or sabotage.

If LeBron James and his gang of super-rich elites help snag Florida—the largest swing state—for the Democrats this fall, it will come with an assist from inside the White House.