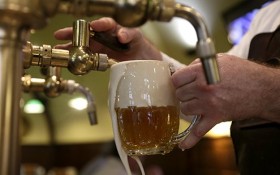 Police are searching for a man who bit off a bartender’s finger after being kicked out of a San Francisco bar at closing time.

Officer Carlos Manfredi said Monday that the suspect had been drinking at the bar in the Marina District on July 17 and tried to go back inside after it closed.

When he wasn’t let in, the man tried to get in through a small window, and the bartender stopped him again.

Manfredi said the two got into a fight after the man began kicking the door to the bar. Police say that during the confrontation, the man bit off the bartender’s ring finger.

The bartender was taken to a hospital, where he was treated for an amputated finger, swollen eyes and bruises to his head.