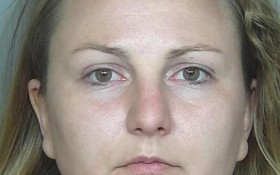 A baby sitter is accused of using two children she was watching to help her rob a bank — a heist allegedly planned to help her pay back money stolen from her employers.

Rachel Einspahr, 28, went to the drive through at the Colorado East Bank & Trust in Severance — about 65 miles north of Denver — on Friday after picking two sisters up after school, according to the Weld County Sheriff’s Office.

She allegedly sent a note through the vacuum tube demanding money for a man in the back of her Nissan Pathfinder threatening to hurt the girls, who are 7 and 1½ years old. The teller, believing the children were in danger, gave her $500, sheriff’s spokesman Matt Turner said.

The girls were not hurt, and one told investigators there never was a man in the vehicle with them.

According to an arrest affidavit, first reported by the Greeley Tribune Tuesday, Einspahr allegedly told investigators she wanted to rob the bank to pay back $15,000 of the money she previously stole under a possible plea agreement. Court documents don’t list who is representing her in the bank robbery case, but lawyers who have represented her in the previous cases didn’t return calls seeking comment.

According to the document, Einspahr, who is in jail, told detectives she first considered robbing a bank in larger nearby Greeley but then went back to Severance to pick up the children. She said she drove around for a while, bought the girls lollipops at a gas station and then removed her license plates and wrote a note for the teller on a side street before going ahead with the alleged robbery at a bank about a half mile from her home, the document said. After the robbery, investigators said she took the children to a park to play so she could put the plates back on.

Deputies, using surveillance video from the bank, found Einspahr’s SUV parked in front of her house and arrested her.

She is scheduled to appear in court in the theft cases on Wednesday, when prosecutors are also expected to file charges against her in the bank robbery.