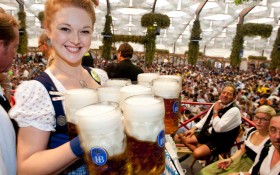 That didn’t take long! The outcry over German traditions being offensive to the country’s Muslim refugees has started already. A Morad Almuradi from the Netherlands created a Change.org petition, demanding Munich cancel its annual Oktoberfest celebration.

Almuradi says, “Muslims can not tolerate this Un-Islamic event,” and that it will “offend all the Muslim refugees coming from Syria, Iraq, Afghanistan.” The petition gained hundreds of signatures before it was closed.

Here’s the petition in full,

I am writing this letter to bring to your attention something that I
and many Muslims believe is unfair and requires attention. I would like to inform you that the Oktoberfest is an Intolerant and Anti-Islamic event. We tried to ignore the event, but there too many Un-Islamic acts done at the Oktoberfest. Such as alcohol consumption, public nudity etc.

We understand that the Oktoberfest is a yearly German tradition, but we, Muslims, can not tolerate this Un-Islamic event, because it offends us and all Muslims on the earth. We are requesting the immediate cancellation of the upcoming Oktoberfest event.

We also believe that the Oktoberfest might also offend all the Muslim refugees coming from Syria, Iraq,
Afghanistan. The cancellation of the Oktoberfest event will help refugees not to forget their Islamic history. Thank you for your attention to this matter.

You can view the petition in its entirety here.