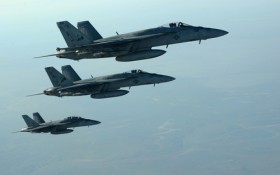 They were plotting to kill Americans and had asked Allah for his blessings.

But for a dozen jihadists in North Africa, they only thing that anointed them was a couple U.S. Air Force warheads.

A Pentagon spokesman says the U.S. conducted airstrikes Monday and Tuesday in Somalia that killed an estimated 12 terrorists affiliated with the al-Shabab Islamic extremist group.

The spokesman, Navy Capt. Jeff Davis, said the targeted militants posed an imminent threat to U.S. personnel who were assisting Somali government forces north of the city of Kismayo in southern Somalia.

These were the latest in a series of U.S. attacks in Somalia aimed at al-Shabab, which has ties to al Qaeda. Al-Shabab has been carrying out a campaign of deadly violence targeting government officials and international troops, as well as hotels and restaurants in the capital.