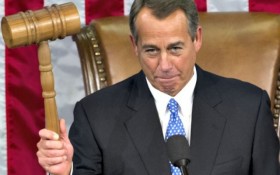 The Freedom Caucus, an alliance of Tea Party Republicans in Capitol Hill, responded with fierce opposition to the attempted coronation of Majority Leader Kevin McCarthy into the House Speaker position Thursday.

So when McCarthy suddenly withdrew his candidacy, it was seen as many hard-right conservatives as a victory.

But it also left John Boehner, who is widely opposed by Tea Party members, in control of the House Speaker position.

Boehner quickly took the opportunity to announce he would stay in the job until the party could decide on a new speaker. And given the fractures within the Republican party, this could be an indefinite timeline.

Thursday morning, McCarthy’s astonished political insiders with his decision to abandon his campaign to become the chamber’s next speaker.

GOP lawmakers were meeting Friday to discuss their next move. On Thursday, Republicans munching barbecue at a closed-door meeting where they seemed ready to coronate McCarthy as their candidate for speaker were aghast when the Californian rose and told them he wouldn’t seek the job.

Facing opposition from a band of hard-right conservatives, some McCarthy supporters said he concluded he would have fallen short of the 218 votes needed when the full House formally elects the speaker. Others said he could have won but GOP lawmakers backing him would have infuriated conservative constituents back home, jeopardizing their own careers.

McCarthy’s announcement leaves the race to succeed the departing Speaker John Boehner wide open. The Ohio Republican delivered his own shocker on Sept. 25 when he said he would retire from Congress Oct. 30. Now, he’s going back on that promise.

Boehner said he would remain in his job until a new speaker was installed, an ironic consequence considering conservatives’ desire to shove him out the door. That election was set for Oct. 29, but its date is now uncertain.

McCarthy had two rivals for the post, Reps. Jason Chaffetz, R-Utah, and Daniel Webster, R-Fla. Neither had broad backing among the House’s 247 Republicans.

“The question in my mind is, are these free and fair elections?” Massie said. “If they don’t have the votes next time, will they postpone it again?”