Atheists to defile scene of Christ’s birth - The Horn News 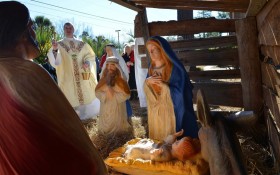 The latest disgusting gesture by atheists in their so-called War on Christmas is coming to Indiana. An atheist organization, Freedom From Religion Foundation (FFRF), has announced plans to defile the 50-year-old holiday nativity scene in Franklin County, Indiana because they claim it violates their rights!

Allying themselves with the Satanic Temple and the ACLU of Indiana, the FFRF filed two lawsuits against the county that claim their religious rights would be violated if they weren’t allowed to make their own nativity scene.

Franklin County was forced by the court system to give in, and now the FFRF plan is to erect their own structure next to the nativity scene as a public protest.

“The Freedom From Religion Foundation will display a Bill of Rights ‘nativity’ and a winter solstice banner this year in Franklin County to counter a Nativity scene that has stood alone on public property for 50 years,” the organization said in a press release.

In an effort to keep their traditional nativity scene, the county was forced to open a public forum for displays, under threat of lawsuit from the atheist organization.

Now the FFRF are going to use this ordinance regulating the use of its lawn by community residents and organizations to put up their intentionally blasphemous display right next to the traditional Christian holiday scene that is meant to remind others of Christ’s birth as the reason for the holiday season.

Earlier this week, The Horn also reported on the forced removal of the Ten Commandments from the Oklahoma State Capitol.