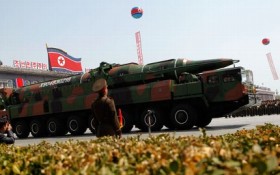 A planned missile launch by North Korea would be “an unmistakable slap in the face” for those arguing against more sanctions in response to its recent nuclear test, the top U.S. diplomat for East Asia said Tuesday.

Assistant Secretary of State Daniel Russel’s comments appeared to be directed at China, the North only major ally. He was speaking after North Korea notified international organizations that it plans to launch an observation satellite into space between Feb. 8 and Feb. 25.

He said a launch that uses ballistic missile technology would be another violation of a U.N. ban and strengthens the argument for the international community to impose “real consequences” on North Korea for destabilizing behavior.

The U.S. has been pushing for the imposition of sanctions following its Jan. 6 nuclear test. China, the North’s main trading partner and source of economic assistance, has condemned that test, but is more reluctant to impose sanctions. Beijing has traditionally be concerned that putting the squeeze on its unpredictable neighbor could destabilize it.

Secretary of State John Kerry sparred with his Chinese counterpart on the issue in Beijing last week, and discussions are continuing among U.N. Security Council members on how to respond to the actions by North Korea, which already faces sanctions under multiple resolutions imposed since 2006 when the North conducted its first nuclear test.

“We share the view that there needs to be consequences to North Korea for its defiance and for its threatening behaviors. Our diplomats are in deep discussion in New York about how to tighten sanctions, how to respond to violations,” Russel told reporters.

“But I would say that yet another violation by the DPRK of the U.N. Security Council resolution, coming on the heels of its nuclear test, would be an unmistakable slap in face to those who argue that you just need to show patience and dialogue with the North Koreans but not sanctions,” he said, referring to the North by its official name, the Democratic People’s Republic of Korea.