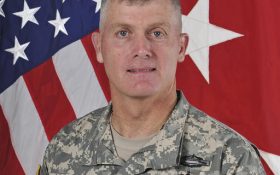 The commander of Fort Riley has been fired and the Army is continuing an investigation opened last week at the Kansas base, officials said Monday, but they declined to provide any other details.

Army spokesman Col. Patrick R. Seiber said that Maj. Gen. Wayne Grigsby was relieved of command of the 1st Infantry Division due to loss of confidence in his ability to lead. Grigsby had been suspended on Friday, but senior Army officials took the additional step of firing him on Monday, as more information was gathered.

In an unusual step, Army officials have declined to disclose the nature of the investigation or provide any information on what type of incident or violation it involves.

One senior Army official said Monday the matter is being investigated by the Army and does not involve other law enforcement agencies. The official was not authorized to discuss the case publicly so spoke on condition of anonymity.

Seiber said a new commander will be named in the coming days.

About 17,000 troops are stationed at Fort Riley. Grigsby assumed command of the base in August 2015, after 31 years of military service that included a stint as commander of the Combined Joint Task Force in East Africa.

Grigsby was last in the news in June when Fort Riley rescinded an invitation for a retired senior military officer to speak at a prayer breakfast at the base. Retired Lt. Gen Jerry Boykin was disinvited after complaints about his views on transgender bathrooms and Muslims.

That invitation was rescinded after Mikey Weinstein, founder of the Military Religious Freedom Foundation, protested to Grigsby, who was base commander at the time.

Boykin’s invitation drew complaints because of comments he has made claiming Islam doesn’t deserve First Amendment protection and remarks about transgender people that were perceived as threats.

There were no suggestions that Grigsby’s current problems were related at all to the Boykin matter.