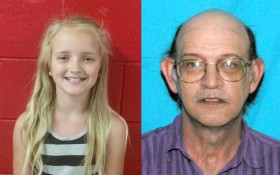 As the Tennessee Bureau of Investigation and cops from all over the country desperately searched for a 9-year-old girl that was allegedly kidnapped by her uncle for more than a week, they asked for the public’s help.

Two Second Amendment advocates heard the call, and decided it was time to step up. The men grabbed their weapons, jumped on their all-terrain vehicles and went searching the back country of northeastern Tennessee on Thursday.

They found the little girl, and are being hailed as heroes after they held the uncle accused of abducting her at gunpoint until police arrived, authorities said.

Donnie Lawson and Stewart Franklin found Carlie Marie Trent in Hawkins County, the same rural part of the state she had disappeared from on May 4 after police said her uncle Gary Simpson took her out of school without permission, Tennessee Bureau of Investigation Director Mark Gwyn said at a news conference.

“This is just two heroes that went onto the property just to see, by chance, could they be there,” Gwyn said. “And they were.”

Gwyn said there were no indications that Carlie was harmed, but she was being taken to a hospital to be examined as a precaution.

“Carlie is safe tonight because of an entire community pulling together and working with law enforcement to bring her home,” Gwyn said. “Anytime someone is taken like this — kidnapped — we know time is not on our side, and we have to act and react very quickly. … Thank God she was rescued safe.”

Simpson, 57, is being charged with especially aggravated kidnapping and may face additional charges, Gwyn said.

Earlier Thursday, the TBI had added Simpson to its Top 10 Most Wanted list and warned that Carlie was in imminent danger.

Simpson is married to the sister of Carlie’s father. The families live close to one another in rural Hawkins County. The uncle and his wife had custody of Carlie and her little sister while their father was jailed on drug charges, but the girls went back to live with their father in 2015, TBI spokesman TBI spokesman Josh DeVine said earlier Thursday. Investigators had not been able to find any work history for Simpson.

Authorities issued the call to check remote areas or campgrounds based on surveillance video showing Simpson stocking up on items from an area Wal-Mart including a bikini, two tubes of colored lip gloss, nail polish, an outdoor chair and a child’s nightgown.