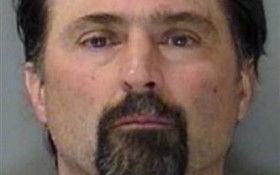 An anti-government activist from Montana who spoke of shooting police, arresting judges and burning down a local courthouse was sentenced Thursday to six years in prison on federal firearms charges.

A federal jury convicted the Gallatin County man in November, after Wolf bought a sawed-off automatic shotgun for $725 from an undercover FBI agent in the parking lot of a truck stop.

An automatic shotgun is categorized as a machine gun under federal law and can be bought only with a special permit, which Wolf did not have. Shotguns with shortened barrels also are illegal.

Wolf said his extreme statements pertained to an anticipated second American Revolution, and he argued they were constitutionally protected as free speech. He maintained his innocence throughout his trial and during a sometimes-rambling, 15-minute monologue that he offered during his sentencing hearing.

“I was entrapped and ultimately denied a fair and impartial trial amounting to a political persecution,” Wolf said.

But Watters said the 53-year-old construction worker crossed the line when he purchased the shotgun. The judge said that action revealed Wolf’s propensity toward violence was real.

Prosecutors sought 10 years in prison for Wolf, who ran an anti-government webcast called “The Montana Republic.”

Assistant U.S. Attorney Bryan Whittaker said a stiff prison sentence was needed to deter Wolf and send a message to others who might contemplate violence against the government.

Wolf’s attorney, Mark Werner with the Federal Defenders Office, argued that his client has no history of violence and did not intend to use the shotgun on any particular person.

Wolf testified at trial that he also wanted to acquire a flamethrower, which is allowed under federal law. On his webcast, Wolf compared shooting police officers to shooting gophers and proposed citizen arrests of judges by militia-like safety committees.

“Once the war starts, yes,” Wolf testified. “Not before that.”