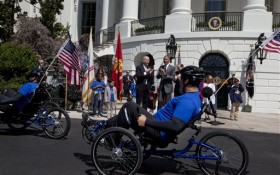 President Barack Obama says the sight of wounded service members riding bicycles is a reminder that service doesn’t end when they take off the uniform.

Some participants in the annual Wounded Warrior Ride who were welcomed at the White House on Thursday are working through less visible wounds, like post-traumatic stress disorder. The ride was established to raise awareness of U.S. service members who suffer the physical and psychological effects of combat.

Obama says the ride highlights the sacrifices U.S. service members have made in defense of the nation.

He says service is in their DNA and giving back is what they do.

After Obama sounded the horn, riders rode a lap around the South Lawn before heading out onto the streets of the nation’s capital.