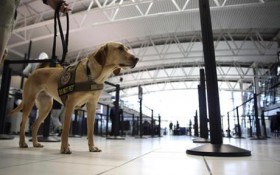 The New York Democrat says the highly trained dogs and additional TSA workers would get travelers through the lines more quickly while improving security.

He cited a regional transit authority report that the average maximum wait time for travelers at Kennedy airport in a monthlong period ending April 15 increased 82 percent from the same period last year.

Schumer says the dog teams could cut time spent going through security in half, and he predicted the lines would become even longer and slower without their addition at New York airports, among the busiest in the world.