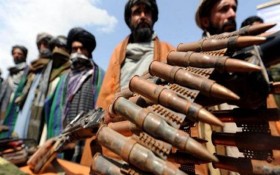 In the latest of a series of brazen jailbreaks in Afghanistan, 355 inmates have escaped an Afghan prison following a coordinated overnight attack by Taliban insurgents, an Afghan official and the Taliban said.

The escaped prisoners were mostly Taliban fighters — including some who may have killed American troops.

But it has also come to light that 20 of the prison’s most dangerous inmates had been transferred to another facility exactly one day before the raid.  How convenient.

This is not the first time such a huge jailbreak has successfully freed Taliban soldiers (see 2011 and 2010 examples), and experts have frequently cited massive corruption in the Afghanistan government.  This implies that at least some of the guards and some government figures must be compliant for these attacks to have such huge success.

Taliban spokesman Zabihullah Mujahid claimed responsibility for the attack on the Ghazni prison in an email sent to the media.

“At least 148 of the escaped inmates are considered to be a serious threat to national security,” an Interior Ministry statement said.