‘Affluenza’ teen to face the music - The Horn News 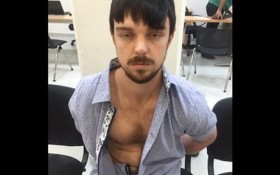 His lawyer said he was too rich to go to jail, and the court seemed to buy it.

Now, the Texas teenager who used an “affluenza” defense in a fatal drunken-driving accident has dropped an appeal against deportation from Mexico and will return to Texas to face charges in the coming days.

Eighteen-year-old Ethan Couch and his mother, Tonya, were detained in the resort of Puerto Vallarta in December. They allegedly fled Texas as prosecutors investigated whether he had violated his probation in the case of a 2013 wreck that killed four people.

Tonya Couch is charged with hindering the apprehension of a felon and could face up to 10 years in prison if convicted.

Ethan Couch had been fighting against a return to Texas, but seems to have some legal cards up his sleeve that may have led him to consent to deportation. Because the alleged probation violation happened while Couch was a minor, it appears potential jail time may be limited.

Plus, a member of Couch’s legal team seemed to suggest the teen may try to argue that his mother forced him to flee to Mexico — a move that many see as another attempt to dodge accountability.

During Couch’s first trial, a defense witness said the teen was coddled into a sense of irresponsibility by his wealthy parents, a condition the expert called “affluenza.” The condition is not recognized as a medical diagnosis by the American Psychiatric Association, and its invocation drew widespread ridicule.

Upon his return to Texas, Ethan Couch will be held in a juvenile detention center. A juvenile judge will hold a hearing to decide whether to continue to hold him there, book him in an adult jail or let him go, said Tarrant County Sheriff Dee Anderson.

A separate hearing is scheduled for Feb. 19 to determine whether Couch’s case is transferred to the adult system. If it is transferred and Couch violates his probation again, he could face up to 10 years in prison per death his accident caused.