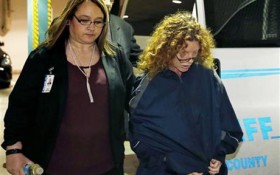 The mother of a fugitive teen who used an “affluenza” defense after killing four people in a drunken crash is set to be arraigned on a charge of hindering the apprehension of a felon.

Tonya Couch was taken to the Tarrant County jail on Thursday after arriving at Dallas-Fort Worth International Airport on a flight from Los Angeles. Her arraignment is scheduled for Friday morning.

Authorities believe Couch and her 18-year-old son, Ethan Couch, fled Texas in November as prosecutors investigated whether Ethan Couch had violated his probation. A video surfaced that appeared to show him at a party where people were drinking.

The two were arrested in Mexico late last month.

Tonya Couch’s attorneys have said she is “eager to have her day in court.”