Above the law? Hillary may escape prosecution - The Horn News 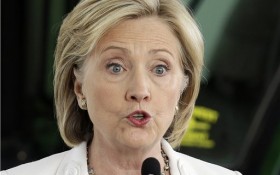 Public outcry over the Hillary Clinton email scandal is growing after the State Department just announced that 125 emails sent over her private server may have contained classified information.

Now legal experts are weighing in, and what they’re saying is outrageous – despite the fact that she may have put national security at risk, prosecuting Clinton may prove nearly impossible.

According to reports from the Associated Press, experts in government secrecy law see almost no possibility of criminal action against Clinton or her top aides in connection with classified information sent over unsecure email while she was secretary of state.

Some Republicans have called Clinton’s actions criminal and compared her situation to that of David Petraeus, the former CIA director who was prosecuted for giving top secret information to his paramour. Others have cited the case of another past CIA chief, John Deutch, who took highly classified material home.

Petraeus pleaded guilty to a misdemeanor; Deutch was pardoned by President Bill Clinton.

Clinton’s critics have focused on the unusual, home-brew email server Clinton used while in office and suggested that she should have known that secrets were improperly coursing through an unsecure system, leaving them easily hackable for foreign intelligence agencies.

But it’s very difficult to prove a crime. The prosecution would have to demonstrate that Clinton or aides knew they were mishandling the information — not that she should have known. Legally speaking, “should have known” is hard to charge.

A case would be possible if material emerges that is so sensitive Clinton must have known it was highly classified, whether marked or not, McAdoo said. But so far, no such email has surfaced. And among the thousands of documents made public, nothing appears near the magnitude of the Top Secret material Petraeus and Deutch mishandled.

“If one person has a copy of one of those deleted emails, and it was about government business, the whole game changes,” said Kel McClanahan, a lawyer and expert in government records.

Until then, Clinton appears untouchable.