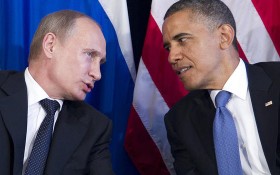 Russian President Vladimir Putin has ordered a military buildup in Syria in response to the United States operations in the area, and is locked in a stare down with President Obama that could have long-term implications.

Coupled with Russia’s aggression in the Ukraine, experts say a new Cold War may be developing with the U.S. and Russia again competing for military influence in nations around the world.

Moscow’s latest actions have taken many by surprise, leaving the Obama administration wondering how to respond and complicating our military’s efforts to combat Islamic State extremists.

Underscoring the administration’s waffling about what to do, Secretary of State John Kerry on Tuesday placed his third phone call in 10 days to Russia’s foreign minister, seeking clarity about Moscow’s moves, the State Department said.

In recent days Russia has sent about a half-dozen battle tanks and other weaponry — along with military advisers, technicians, security guards and portable housing units — to Syria with the apparent goal of setting up an air base near the coastal town of Latakia, a stronghold of the Syrian president.

But U.S. officials insist Putin’s intentions in Syria, particularly in the medium- to long-term, remain a mystery. Privately, some believe he may be laying the groundwork for a large Russian presence in a post-Assad Syria, and therefore greater influence for Russia in the Middle East.

And so far, there seems to be limited will to stop him.