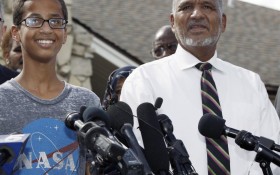 He was supposed to be just an all-American boy who loved science and was unfairly targeted by his Irving, TX school after bringing in a homemade clock. His story even helped him wrangle a recent White House visit and support from companies like Google and Facebook.

But in recent days the narrative of Ahmed “Clock Boy” Mohammed has taken an alarming turn that is causing embarrassment for President Obama and other leaders who stood behind him after his September 14 arrest.

Since his arrest and release, Ahmed has traveled to Sudan to meet with one of Africa’s top terrorist sponsors and war criminals, Sudan President Omar al-Bashir. al-Bashir is wanted by International Criminal Court on charges of genocide and war crimes for atrocities linked to the Darfur fighting.

Under al-Bashir’s leadership, Sudan sheltered noted terrorists like Osama bin Laden and Carlos the Jackal, and for years al-Bashir had direct ties to the terrorist group Hezbollah.

According to reports, al-Bashir and Ahmed’s father, Mohamed Elhassan Mohamed, are old acquaintances. Ahmed’s father is a Sudanese immigrant to the US and a former presidential candidate in Sudan.

Ahmed Mohamed’s family also released a statement Tuesday saying they are moving immediately to Doha, Qatar. He recently visited the country as part of a whirlwind month that included a Monday stop at the White House and an appearance Tuesday at the US Capitol.

Ahmed took a homemade clock to his high school to show a teacher on September 14, but another teacher thought it could be a bomb. The school contacted police, who handcuffed the boy and took him to a detention center. The school suspended him for three days.

A police photo of the device shows a carrying case containing a circuit board and power supply wired to a digital display. Police ultimately chose not to charge Ahmed with having a hoax bomb, but his parents still withdrew him from the school and complained of racial and religious profiling.