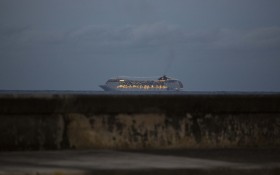 A Walt Disney Co. cruise ship has rescued three fugitives off the coast of Cuba who were wanted in New Orleans.

U.S. Marshal Amos Rojas Jr. said in a news release that last Thursday, the Disney Fantasy cruise ship found the fugitives clinging to a capsized boat. He says all three were wanted for violating their supervised release on federal credit card fraud charges in New Orleans.

The fugitives were Cuban nationals who were from the United States. Rojas says authorities believe the three may have been fleeing to Cuba to avoid prosecution.

They have been charged with violation of supervised release. It’s unclear if they have attorneys.