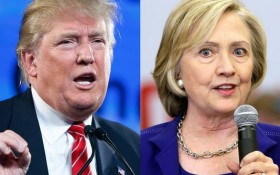 With the presidential election looming, the daily threat of terrorism, and legislative battles over everything from guns to abortion, 2016 promises to be one of the most important years in the history of our nation.

But how will it all shake out? What will Obama try in his last days before he leaves office? Will America elect Obama 2.0 in November? Or will a dark horse shake up the race… and take back America?

Here are five things The Horn expects to happen in 2016. Tell us if you agree – and add your own predictions in the comments section below.

Billionaire – and political outsider – Donald Trump will face off against former Secretary of State Hillary Clinton in the 2016 presidential election.

The Hillary part is no surprise. Clinton is a virtual shoo-in for the Democratic nomination, and the Democratic Party seems to be doing everything in its power to help her defeat upstart (and socialist) Bernie Sanders. Not even two decade’s worth of scandal can stop her from securing the coronation, ooops, we mean nomination.

But, despite enormous leads in the polls and a campaign that shows no sign of weakening, Trump faces one big obstacle… his own party. The Republican Party isn’t in love with Trump as the nominee, but they’ll have no choice. Despite all our problems, America is still a democracy and you can’t ignore the will of the people.

In the end, the GOP will be forced to rally around him. For his part, Trump’s lead in national polling should translate to success in early primaries and momentum. No third party bid will be necessary – look for Trump to be the Republican candidate for president in 2016.

The Obama Administration has been hinting for months that President Obama could take unilateral, executive action on guns. And as he heads into his last year as president – and never has to stand for election again – Obama seems poised to strike.

Expect his executive order to focus on background checks and gun show sales. Congress will take immediate action to overturn the order, setting up an ugly fight.

Don’t expect Hillary Clinton to thank Obama for the executive order, either. While Clinton is no friend of gun owners, she’s already facing an uphill climb among the one-third of American adults who possess firearms. And gun owners will be a crucial demographic in the 2016 race.

In the end, we think Congress will slap down Obama’s order, keeping our 2nd Amendment rights safe… for now.

With the prospect of a Republican president taking office, expect a member of the Supreme Court’s liberal wing to retire to give Obama a chance to make an appointment.

Obama has little chance of getting an overly liberal justice confirmed, but even a more moderate justice will be seen as a win, compared to who Democrats fear a president like Trump would nominate.

Justices Ruth Bader Ginsburg (82) and Stephen Breyer (77) are prime candidates to step down. Both say they’re not contemplating retirement, but they’re not going to live forever and election dynamics could force their hands.

Despite their occasional courtship (which seems to be on the rocks lately), conservatives’ dream of a Donald Trump-Ted Cruz ticket may go up in smoke. Trump is pragmatic, and knows he doesn’t need Cruz to win a solidly red state like Texas.

And while Cruz can help mobilize conservatives and evangelicals, these voters will have no trouble rallying against Hillary Clinton.

Instead, look for Trump to pick a VP from a battleground state, like Florida, Ohio, Pennsylvania, Wisconsin, Virginia or North Carolina.

But that doesn’t mean Trump will ignore Cruz. In a Trump administration, expect Cruz to secure a role where he can defend the Constitution and religious liberty, such as attorney general. Cruz previously served as solicitor general in Texas.

His campaign was originally laughed off as a media stunt, but no one is laughing now. In fact, Trump is proving a formidable candidate. And he’s the outsider that many voters have been waiting for.

National polls showing Trump in a neck-and-neck race with Clinton are better news for Trump than they are for Clinton. It’s true that the GOP is yet to unite around Trump, and some party insiders are still hoping he’s replaced by a more mainline candidate. But faced with the prospect of a Clinton presidency, GOP voters and other current “undecideds” will come over to Trump’s camp.

And when it comes down to it, the race between Clinton and Trump may not be as close as polls indicate.

Get ready for a new era, America… under President Donald Trump.

What do you think? Are we nuts – or right on target? Sound off and share your own 2016 predictions below!