20 injured in train derailment in Kansas - The Horn News 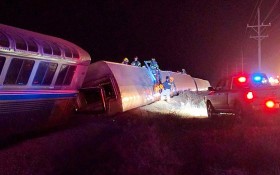 An Amtrak train has derailed in southwest Kansas, sending about 20 people to the hospital.

An Amtrak statement says the train was traveling from Los Angeles to Chicago early Monday when it derailed just after midnight about 20 miles west of Dodge City.

Amtrak says about 20 passengers have been taken to hospitals in Dodge City and Garden City. All others were taken to a recreation center and will be given alternate transportation to their final destination.

Amtrak says the train consisted of two locomotives and nine cars and had about 128 passengers and 14 crew members on board.