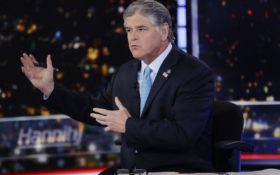 Democratic National Convention staffer Seth Rich was infamously murdered in 2016. Police say the slaying was a robbery gone wrong. Controversy has surrounded the murder in the years since.

Rumors swirled that Rich was murdered for politically motivated reasons. Conspiracy theorists claimed he was murdered over the Wikileaks email hack of the Democratic National Committee that summer.

Now, it’s all heading to court — and two of Fox News’ biggest stars are going to testify under oath.

Sean Hannity and Lou Dobbs were deposed this week as part of a lawsuit by Rich’s parents, according to The Daily Beast. Fox News reporter Malia Zimmerman and frequent guest Ed Butowsky were also included in the lawsuit.

Joel and Mary Rich, citing emotional distress, say that the network spread a false conspiracy about the murder, which has been officially ruled by authorities to be botched robbery. The Rich family lawsuit is based on a Fox News story — later retracted — connecting the murder to the Hillary Clinton campaign.

The lawsuit also sought to rope in other Fox News stars.

Laura Ingraham, according to The Hill, is fighting an attempt to include her in the lawsuit. Ingraham once claimed that the mainstream media was suspiciously silent about the controversial murder.

The family is also seeking to depose analyst Judge Andrew Napolitano. Napolitano was also recently named in an unrelated sexual abuse scandal earlier in the week.