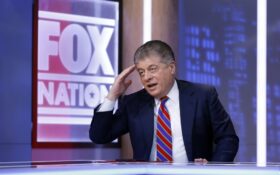 Fox News’ Judge Andrew Napolitano has made a long and storied career out of doling out punishments.

But now he may be the one facing charges.

The story behind the alleged sexual abuse is a rather unusual one.

Napolitano was the judge presiding over Corbishley’s case, and according to the lawsuit told the suspect to “be a good boy” and comply with the judge’s demands.

“You know you could be going away for a long time,” Napolitano allegedly told Corbishley.

“At this moment, Plaintiff was paralyzed with fear. He wanted desperately to stop Defendant Napolitano’s sexual assault, but he was terrified about what Judge Napolitano would do to him if he resisted or fought back.”

In the end, Napolitano sentenced Corbishley with minor charges: probation and community service.

But Corbishley’s co-defendant? According to the suit, his partner in crime received serious prison time.

That’s not all the suit alledges.

New York Daily News reported that it was Corbishley’s lawyer at the time, Robert Hollis, who allegedly sent the suspect on trial to Napolitano’s home to shovel snow and provoke the prominent judge. According to the suit, Hollis assured Corbishley he was in good hands after the encounter.

“We both have him now … don’t worry about anything.”

Napolitano is aggressively denying the allegations.

“These accusations are completely false. Full stop. I have never done anything like what the accuser describes, at any time, to anyone, for any reason. I have never had any personal relationship or inappropriate contact or communication of any kind with the man making this accusation. Each and every one of his claims against me are pure fiction. Period,” he said in a statement.

His bosses at Fox News have also been made aware of the accusations.

“Judge Napolitano has assured us in the strongest possible terms that these allegations are false and he will fight them aggressively in court,” Fox News said in a statement.