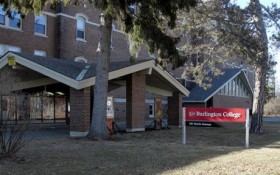 A tiny Vermont college that has faced financial troubles since it was headed by the wife of Democratic presidential candidate Bernie Sanders will close at the end of the month, officials announced Monday.

Burlington College has been struggling under the weight of its $10 million purchase of property and buildings it made in 2010 from the Roman Catholic Diocese of Burlington during Jane Sanders’ presidency.

President since 2004, she wanted to double the then-200 student school enrollment by 2020. Sanders left the private liberal arts college in 2011. A request to the Sanders campaign for comment from Jane Sanders drew no immediate response.

Last year, the college sold most of the land it had purchased on the Lake Champlain shore, widely considered the most valuable undeveloped real estate in Burlington, to a developer for $7.65 million. But that was not enough for the school to regain its financial footing.

It was placed on probation by its accrediting agency in 2014 for a lack of sufficient financial resources. Its lender in April told the college its line of credit would not be renewed.

“These hurdles are insurmountable at this time,” Dean of Operations and Advancement Coralee Holm said in a statement. “It is with a great sense of loss to the educational community that Burlington College’s progressive and unique educational model will no longer be available to students.”

The school, founded in 1972, held graduation ceremonies on Saturday. Holm said its current students would be able to finish their degrees at other schools in the area.